Celebrate Old Glory ... with a Basket and a Story! 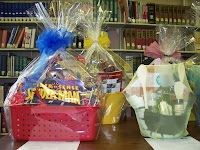 Silent Auction of
Book-Themed Gift Baskets
Again this year the Lebanon Friends are having their annual raiser at the Independence Day Celebration in Lebanon. Each themed basket contains a book and other gift items on the theme; the silent auction of the baskets begins in late June and is finished on July 4th about 3 pm when bids are closed.
Baskets are on display now at the library and more are arriving every day! They will be on display at the Friends booth at the July 4th afternoon festivities and you can place your bid and make sure that no one has outbid you!

All baskets are donated by individuals, businesses and organizations so the Friends put the money made into children's programs at the Lebanon Library. The baskets make great gifts and support a wonderful cause.

Stop by the Lebanon Library and look at all the baskets.
By Rusco at June 28, 2011 No comments: 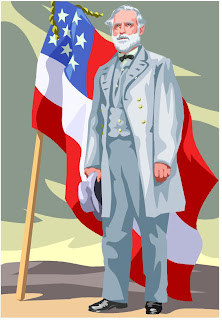 The Russell County Public Library competed successfully for a grant titled Let's Talk About It: Making Sense of the American Civil War. Only 65 libraries across the United States were awarded this grant, from the American Library Association and the National Endowment for the Humanities. Russell County Public Library is honored to have been one of four libraries in Virginia chosen. The library will have several programs beginning in the Fall as well as several new books relating to the Civil War. Watch for more information to be announced.
The library in Lebanon has installed a new security system which will be activated this summer, and will alarm if books are taken through the doors without being checked out. The library hopes to better serve the community by decreasing theft and thereby keeping library materials available to all patrons who wish to use them.

The library has added new subscriptions which include The Wall Street Journal, Cooking with Paula Deen, and Country Sample. Stop by the library to see them all.
By Jennifer Bundy at June 18, 2011 No comments: