The Library of Congress is the USA's national library, although it was actually established for Congress, hence the name. C-SPAN will premiere an original documentary on the Library of Congress Monday, July 18, at 8 pm & 11 pm ET. The program will go behind the scenes and tour the iconic Jefferson Building and share the history and treasures of this American institution.

Check out C-SPAN to preview portions of the program and see an interview with a former Librarian of Congress, James Billington.You may also want to visit the Library of Congress online. The American Memory Project has amazing stuff, like old baseball cards and daguerreotype photos from the 1800s, such as one of firefighters in Charleston, South Carolina from the 1850s.

You can also listen to sound recordings; how about Southern Appalachian fiddle tunes, Civil War music, or public reactions (audio & video) to September 11, 2001? Can you believe that it has been 10 years? There are also public reactions (man-on-the-street) interviews to Pearl Harbor in 1941-42.

Take an online tour of the library if you miss the documentary July 18. And remember Virginia's unique connection to the Library of Congress--after the Capitol was burned by British soldiers in 1814, Thomas Jefferson offered to sell his book collection to Congress. After a little haggling on price (they settled on $24,000) Jefferson's collection became the seed of the new library.

Watch the C-SPAN documentary on the Library of Congress July 18 at 8 pm and you just might see a few of Mr. Jefferson's books.
By Rusco at July 15, 2011 No comments: 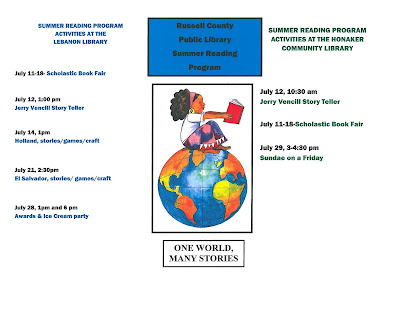 Bring Your Children and Join Us!