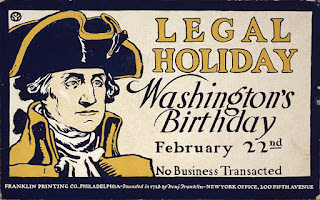 From October through February, holidays abound. Can you imagine having to work every day of the year? For much of the history of the USA, people did work virtually every day. If you grow your own food and keep livestock, you don't get a day off. The cow still wants milking and the chickens still need to be fed. Work might be the bare minimum (the cow and the chickens) on Sundays even if there wasn't a church nearby.

The first holidays designated by Congress were declared in 1870--New Year's Day, Independence Day, Thanksgiving, and Christmas Day--only for federal workers in the District of Columbia.  (They were later applied to all federal government employees.)

The holidays celebrate important events in our history (Independence Day, aka the 4th of July) or honor people--individuals like Dr. Martin Luther King, Jr. or collectively, laborers on Labor Day. Some of the holidays have evolved and changed their names as we 'accumulate' more history.  Memorial Day was originally Decoration Day, when those who died in the Civil War were honored by tributes decorating their graves and monuments. After a few more conflicts, the name was changed to Memorial Day to honor those who died in the ensuing wars and conflicts. Armistice Day marked the end of the Great War, now know as World War I. It was marked as a National Peace Holiday, and though the sentiment remained, the name was changed to honor veterans of all wars.

Getting confused? That's why Congress passed the Uniform Monday Holiday Act in 1968. It moved many holidays to Mondays for consistency and to avoid interrupting commerce too much with holidays mid-week.  Or did you think those holidays were just for retail sales?

Back to that Friday before M. L. King, Jr., Day...that is Lee-Jackson Day, honoring Robert E. Lee and Thomas Jonathan (Stonewall) Jackson. For a number of years, Jackson, King, and Lee actually shared a holiday in Virginia. Other Southern states still have a Confederate memorial day commemoration.

And that October holiday? In Virginia it's officially Columbus Day and Yorktown Victory Day, to commemorate both Columbus' voyage to the Americas and final victory at Yorktown in the Revolutionary War.

Enjoy that day off.

Source: Federal Holidays: Evolution and Current Practices, Congressional Research Service, 2014; The Code of Virginia.
By Rusco at January 16, 2018 No comments: