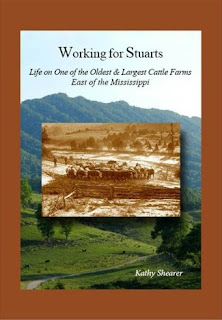 Virginia writer Earl Hamner, creator of the television show The Waltons, wrote about growing up on a Virginia farm during the Great Depression. He says that in the show he was accused of portraying the depression years as too happy. His response was that he and his siblings, although poor, believed that they lived in the best of all possible times. He wrote, “It may have been severe for city people, but we were country people with country people’s advantages,” and “I am probably the only writer in Hollywood who knows how to milk a cow, not that I get called on much to use that particular talent.”

Speaking of Virginia farms, did you know that Russell County was once a part of one of the largest farms east of the Mississippi? In fact, so were several other Southwest Virginia counties. At its largest, the Stuart Land and Cattle Corporation covered about 100,000 acres! In the beginning, the land belonged to Thomas Hendricks, who was given a land grant in 1769 by the English government in the area that became known as Elk Garden.  In 1868, William Alexander Stuart purchased this same land of 2, 144 acres for $60,000, which was the beginning of Stuart Land & Cattle. William continued to expand by buying other property. William’s son, Henry Carter Stuart, born in 1855, went on to expand the land holdings even further, and also served as governor of Virginia from 1914-1918.

Since its creation Russell County has been largely a farming county. The peak in the number of farms was in 1935, with 3,721 farms. The greatest land amount in farms was in 1890, when there were 296,080 acres of farmland. Although these numbers began to steadily decrease in 1945, according to the 2012 agricultural census (the most recent data available), there are still 995 farms and 187,620 acres of farmland in Russell County.

In fact, for the state of Virginia as a whole, agriculture is by far the largest industry. Virginia has about 46,000 farms with an economic impact of $52 billion annually. Broilers, cattle, milk, soybeans, and turkeys are the top five revenue generators.

To learn more about farming history in Russell County, join us on September 27th at 3:00 pm for the release of Kathy Shearer’s new book, Working for Stuarts. It’s comprised of the history of Stuart Land & Cattle Company, as told by the people who worked for the company.