Russell County Public Libraries are closed January 1 & 2, 2012. We reopen with new hours on January 3rd. Read our previous blog entry or our webpage for the new hours.
By Rusco at December 29, 2011 No comments:

When the libraries open on January 3, 2012, new hours will be in effect. These changes are based on patterns of patron use so will better meet the needs of patrons. Lebanon Library’s hours will change seasonally, closing Monday and Tuesday at 7 pm during the winter while remaining open Monday and Tuesday until 8 pm during the summer. Lebanon Library will follow the summer schedule Memorial Day through Labor Day. If it seems confusing, please note the Lebanon Library hours are the same Wednesday through Sunday all year round. Honaker Community Library’s hours will remain the same year round.

After 150 years, people are still talking about the Civil War. And during the winter, we will be talking about it at Lebanon Library on Sunday afternoons.

A reading and discussion series begins January 8th at 2 pm and will continue every other Sunday through March 4. Come by the library and pick up your books and join us. The books are engaging (not HARD!) and there will NOT be a quiz; so if you don't finish the book, no problem!

Here are the first books we will read from:
March by Geraldine Brooks
America's War, an anthology prepared for this discussion series by renowned Civil War historian Ed Ayers.

Leading our discussions will be Dr. Brian McKnight, a history professor at UVA-Wise. Dr. McKnight is a native of Southwest Virginia and has written about the Civil War in the Southern Appalachians.
On the other Sundays in January and February, we will be screening Civil War films, alternating a documentary, like Civil War Minutes, with a feature film, Glory and CSA: Confederate States of America, a Spike Lee film.


Let's Talk About It: Making Sense of the American Civil War, a reading and discussion series, has been made possible through a grant from the National Endowment for the Humanities and the American Library Association.
By Rusco at December 19, 2011 No comments: 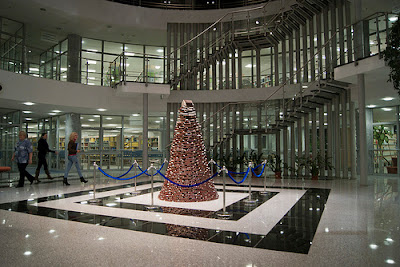 This Christmas tree at the University of Warmia and Mazury in Olsztyn, Poland, is contructed entirely of books.

About five feet wide at the base and eight feet tall, it is composed of 1600 hardcover books, none of which were harmed in the making of the tree! The librarian said that the books, mostly duplicates and discards, were treated respectfully--no cutting to fit.

You can see more pictures and a video of construction of the tree at the library's Polish language website
http://pulowerek.pl/2011/12/06/o-tym-jak-zrobilismy-pierwsza-polska-choinke-z-ksiazek/  You can also find pictures on Flickr.

Thanks to American Libraries for bringing this to our attention. 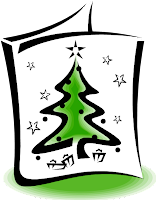 The Craft Circle meets Thursday, December 15, at 1 pm to make Christmas cards. The library will have some card-making supplies available or you can bring your own supplies from home.

If your cards are already in the mail, stop by with your current craft project. You can work on your project and enjoy the company of other crafters.
By Rusco at December 13, 2011 No comments:

Honaker Community Library is serving up some of their regular programming AND some seasonal specialties. Take a look, mark your calendar and stop by the library.

Call to find out what holiday films are showing on December 11 & 21.

December doesn't have many special programs, just the usual... Below is a list of events at Lebanon Library. Check back tomorrow for a list of Honaker's upcoming events.

Relay for Life Tree - Russell County Rotary Club sponsors this tree with ribbons to remember friends and loved ones affected by cancer. Each ribbon is $5 and all money is donated to Relay for Life. Ribbons available from Rotary Club members and the Lebanon Library.
By Rusco at December 01, 2011 No comments: